Posted on March 31, 2019 by susanonthesoapbox

Last Thursday Mr and Ms Soapbox joined hundreds of Calgarians protesting Mr Kenney’s plan to out kids who join gay-straight alliances (GSAs) in schools.  The question on everyone’s mind was why would the man who says he’s fit to govern Alberta enact legislation that increases the risk of harm to LGBTQ2S kids? 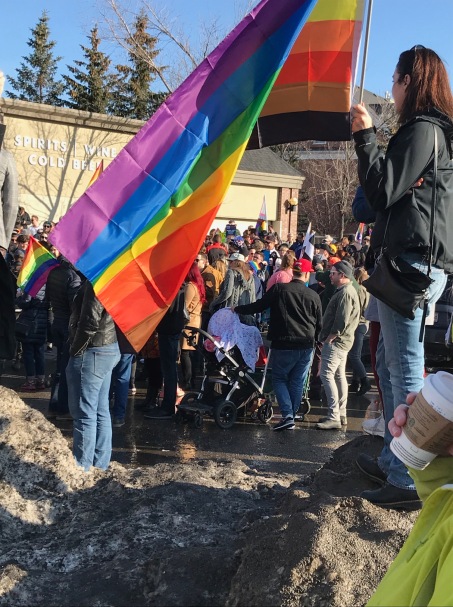 Getting ready to visit Doug Schweitzer

Since Mr Kenney wasn’t around to give us an answer, we gathered in front of UCP candidate Doug Schweitzer’s campaign office to see if he had anything to say.  The lights were off, there was nobody home—a fitting metaphor for Mr Schweitzer after his flip flop on this issue.

So, we turned to Mr Kenney’s statement as set out in the Alberta Hansard.

But first a little background.

The PC government passed Bill 10 which required schools to let students set up GSAs.  GSAs are clubs that provide a safe space for LGBTQ2S and straight kids to hang out.  They are not part of the school curriculum.  Remember that, it’s important.

The NDP were concerned that Bill 10 didn’t go far enough to protect students’ privacy and passed Bill 24 to ensure students had the right to form GSAs without fear of being outed.

Mr Kenney’s supporters, people like John Carpay, say GSAs are sex clubs which indoctrinate young people to deviant behavior and have launched a law suit to shut them down.

Notwithstanding Mr Carpay’s histrionics, Mr Kenney says he supports GSAs but (and it’s a big but) if he’s elected he’ll get rid of Bill 24 which prohibits schools from outing kids who join GSAs.

Bottom line, if Mr Kenney becomes premier, students who could benefit from belonging to a GSA will be afraid to join one, lest their teachers out them to their parents.  Mr Kenney effectively nipped GSAs in the bud.  Cunning, eh?

Mr Kenney says outings would be “very rare” but provides no evidence to back this up.  He says outings would only deal with “very young kids or kids with unique emotional and mental-health challenges”, this ignores the fact Bill 24 doesn’t stop schools from giving notice in these situations, all it does is ensure notification is not triggered simply because a kid joins a GSA.

Mr Kenney provided other reasons for ditching Bill 24 in a statement read on his behalf in the Legislature on Nov 15, 2017 when the Bill was under debate.

Unfortunately for Mr Kenney the arguments he raises in support of his position undermine it.

He starts by obfuscating the facts.  He pretends that voluntary membership in a school club is the same as participation in mandatory school curriculum and concludes Bill 24 violates the School Act which requires parental notification of curriculum and material which “include subject-matter that deals primarily and explicitly with religion or human sexuality”.  This assumes GSAs are mandatory courses and they deal explicitly with human sexuality.  They’re not.  They’re clubs that run bake sales, create posters, host events, invite guest speakers, and do a myriad of other things.  And—say it again with me—they are not part of the mandatory school curriculum, no notification is required and Kenney’s reference to the School Act is misleading and irrelevant.

He says the Universal Declaration of Human Rights (1948) states parents have the right to choose the kind of education given to their children.  Fine, but GSAs are clubs, they’re not part of the mandatory education curriculum so this argument doesn’t fly.

Digression:  Now that he raised it, I’d like to point out the Declaration is a precedent for other legislative changes:  it protects the right to a living wage (how about $15/hour?),  the right to create and join trade unions and the rights of mothers and children to special care (say for example, $25/day daycare?).  It also says these rights cannot be destroyed by the state (oh oh).

Mr Kenney then trots out the International Covenant on Civil and Political Rights (1976) which says parents are free to ensure the religious and moral education of their children conforms with their own conviction.  He doesn’t mention the purpose of the International Covenant is to protect a person’s right to be free from coercion in thought, conscience and religion in the context of war, genocide, torture, and slavery.  The International Covenant does not apply to Bill 24 because kids are not coerced into joining a school club and their parents are not prevented from providing their kids with a religious and moral education that conforms to their own beliefs.  (GSAs may result in spirited discussions around the dinner table but that’s a good thing if parents want to raise kids who aren’t mindless robots).

Given Mr Kenney’s affinity for international declarations and conventions, it’s surprising (well, maybe not) that he overlooked the UNICEF Convention on the Rights of the Child (1989) which states:

Kenney’s only possible argument is one based on “morals” (3rd bullet), but he supports GSAs so he can’t possible consider them to be immoral, right?

The UN recognized an adult’s right to autonomy and self determination in 1948.  UNICEF recognized the same rights for children 41 years later.

There’s only one response to Mr Kenney’s appalling performance on this file.  It comes from my favourite reality TV star RuPaul who dismisses drag queens who’ve lost the lip sync competition with a simple phrase…

16 Responses to GSAs…Here we go again