Posted on April 7, 2019 by susanonthesoapbox

The UCP policy document opens with a letter from Jason Kenney which cribs Ronald Reagan’s well known question, “Are you better off today than you were four years ago?”

Kenney’s answer is no, and he lists a number of reasons why it’s time for a change.

The “time for a change” pitch is classic political rhetoric, Kenney can be forgiven for borrowing it, however we can’t forgive him for revamping the UCP policy document from top to bottom.

When asked about the revamp, Kenney replied Pffft! It was nothing, he’d only made some minor edits, nothing substantive had changed.

Take a look at page 8 where Kenney sets out the story of how the UCP was created. 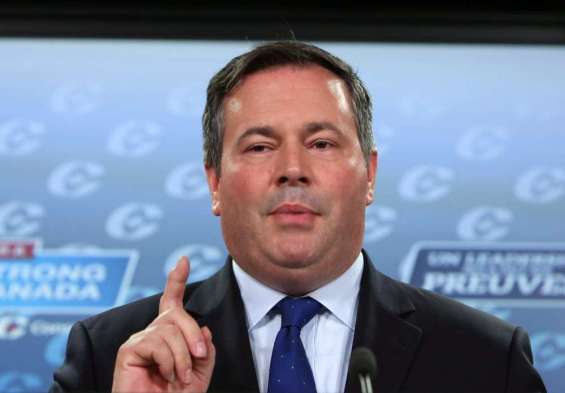 The Leader of the Free Enterprise Party

Originally Kenney said the UCP was “born of the province-wide conservative unity movement [which] was created specifically for this purpose [of doing better than the NDP].”

Well, that’s certainly what we thought at the time, however in the revised document Kenney changed the story of who birthed them by saying the UCP was a party “born of the province-wide free enterprise unity movement, it is a broad coalition reflecting today’s Alberta that seeks to create a new Alberta Advantage.”

“Free enterprise” is an economic system not a political one, where businesses are free from government control.  Synonyms for “free enterprise” include laissez-faire economy, market economy and private enterprise.  Who birthed the UCP?  Apparently, the U of C Economics Department.

Kenney holds the pen so he can do whatever he wants, but one wonders whether the Albertans who voted to merge the Wildrose and PC parties into a united conservative party to defeat Notley’s NDP were aware they would soon be members of a group loosely organized around laissez-faire economic principles, not true blue conservative ones.

We all know what conservatism looks like, but do we, or more importantly, does Jason Kenney know what “free enterprise-ism” looks like?

The UCP policy document is no help, in fact it’s a dog’s breakfast of everything from conspiracy theories to fun with numbers (yes, math is hard).

A free enterprise economic system demands small government and little to no regulatory oversight.  Businesses sink or swim based on their own merits.

In fairness, the UCP policy document achieves the free enterpriser’s dream in a number of places.  It calls for a reduction of red tape so more decisions can be made without regulatory oversight, and increased privatization in education and health care, the privatization of parts of the public service, and so on.

But it also abandons the sink or swim philosophy and promises to interfere in the business sector, big time.

The UCP outlines a number of interventions in the energy sector.

It will pressure Enbridge and TCPL to restart Northern Gateway and Energy East pipelines (who cares if the pipeline companies have committed their people and financial resources elsewhere, the government knows best).

It will adopt the “Kvisle report” which suggests the government should intervene in natural gas markets  to prop up sagging natural gas prices.  Intervention could take the form of royalty and investment credits to natural gas producers, meddling with complex commercial arrangements, becoming a shipper on a pipeline, providing financial backstops to smaller companies that can’t afford to sign up for long term shipping contracts, trying to influence pipeline tolling principles (this is dangerous given the toll impacts the company’s financial structure and credit ratings) and maybe even buying a stake in BC’s LNG plant.

The UCP criticized the NDP for spending $3.7 billion on rail cars to help oil companies transport crude to market—that was interfering with the free market—but it has no problem picking winners and losers in the natural gas or petrochemicals sector;  it’s fine when it’s the UCP’s idea because the UCP is the free enterprise party…right?

Math is hard and statistics and accounting are even harder.

It’s unclear where UCP gets its statistics but there’s a disconnect in the stats in the old policy document and the revised version.

For all its talk about balancing the budget in 2023, it’s hard to put any faith in the UCP’s claim that it will achieve balance without cutting front line services given the budget relies on a “plug” number ($48.8 billion) for operating expenses for the entire four year term and includes new UCP commitments but fails to account for inflation and population growth which is projected to increase costs by 13-14%.

The UCP says we can rely on its budget because Stokes Economics says it’s doable and Stokes advised the Saskatchewan Party in 2007 so they’re credible.  This is hardly reassuring given that the Saskatchewan Party tabled 10 budgets, six of which were deficits and resulted in hikes in the provincial sales tax and cuts in services.

Having said that I suppose we should be grateful Kenney revised the UCP policy document to say the UCP would engage a Blue Ribbon Committee “to recommend a path to balance” because neither Stokes nor the UCP have much credibility at this point.

Monsters under the bed

Question:  How many free enterprisers does it take to pull a monster out from under the bed?

Answer: None, free enterprisers don’t believe in monsters, but Jason Kenney does.

The UCP policy document reveals not one but three shadowy groups (excluding the Notley/Trudeau cabal) who are determined to bring Alberta to its knees; rest assured Kenney will sue each and every one of them.

Kenney will roll all three sectors into his “fight back” strategy which will deploy a $30 million “war room” and millions more to pay for litigation to put these shadowy  characters in their place once and for all.  (Where’s the Green Lantern when you need him?)

The UCP policy document sets out some of the costs of the “fight back” strategy but fails to account for the time and money wasted by public servants overseeing stupid things like:

To paraphrase another Ronald Reagan quote, “The nine most terrifying words in the English language are ‘I am from the UCP government and I’m here to help”.

Is there no one who can save us from the UCP free enterprise party?