“Look in the Mirror”

Posted on March 8, 2015 by susanonthesoapbox

“In terms of who is responsible we all need only to look in the mirror.  Basically all of us have had the best of everything and haven’t had to pay the cost.”—Premier Jim Prentice musing about Alberta’s $7 billion budget deficit

Those four little words—look in the mirror—swept Jim Prentice into a storm of criticism.

He says it’s a Twitter tempest. All he meant by “look in the mirror” was that Alberta’s fiscal crisis is “a shared responsibility”.

Is “shared responsibility” different from “look in the mirror”? No, because that’s precisely the message Mr Prentice intends to send.

Any politician who has taken media training knows that it’s the politician, not the interviewer, who controls the message. 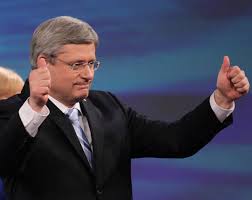 Prime Minister Harper, the master of the controlled message, hired a government-relations consultant from Navigator to create a magic form called a Message Event Proposal (MEP) template. The MEP template forced Harper’s team to think about key messages, strategic objectives, desired headlines and desired sound-bites prior to a media appearance. It ensured they stayed on message.*

Mr Prentice, a former Harper cabinet minister, should be very familiar with both Navigator and the MEP template.

If he used the MEP template for his “look in the mirror” radio interview* his key messages would look like this:

A caller asked Mr Prentice to consider a range of revenue tools, including progressive income tax. Mr Prentice used the question to launch his first message: “We all want to blame somebody for the circumstances we’re in. But the bottom line is we’ve had the highest cost and the best services in the country and we haven’t built, basically, a revenue model that sustains them.”

Blame? Who said anything about blame? The caller was asking about revenue tools.

Mr Prentice ignored the question and repeated the message: “In terms of who is responsible we all need only to look in the mirror.  Basically all of us have had the best of everything and haven’t had to pay the cost.”

Key message: Don’t blame the government, blame yourself for demanding the best public services in the country.

Key message #2: Corporations are not in the mirror

A caller asked why Mr Prentice refused to raise corporate taxes if “we’re all in this together”.

Mr Prentice replied: “If we increase [corporate] taxes it will certainly result in Albertans losing their jobs.

He hammered “lost jobs” seven times in the space of three minutes, ignoring the fact that the caller was asking for higher taxes, not the highest taxes in Canada.

Key message: corporations are not in the mirror because higher taxes means—say it with me now—we’ll all lose our jobs.

Key message #3: Everyone else is in the mirror

When asked how he was going to implement a 5% (actually 9%) cut in public services and still protect front line workers, Mr Prentice deflected the question, stating “virtually” every public servant was 10% overpaid and Alberta’s public service was the most expensive in the country.

Key message: the public service is fat and as a result of their greed all Albertans will suffer.

The public was outraged. Opposition parties demanded an apology.

He and his MLA spokesmen, Mr Mandel and Mr Campbell, said Mr Prentice’s comments were taken out of context.

Messrs Mandel and Campbell had not heard the interview or seen the online comments. Presumably they were equipped with well scripted MEPs of their own.

Mr Prentice said: “What I said was that as Albertans, we’re in the circumstance that we’re in together, we got into it together and the only solutions are going to be for us to get out of it together”.

I beg your pardon???

We did not get into this together. In fact a great many of us voted Wildrose, Liberal, NDP,  Green and Alberta Party to prevent exactly this kind of fiscal meltdown.

Learning from the Master

They said Mr Prentice’s comments were “blown out of proportion”.

Blown out of proportion by whom? The thousands of furious Albertans who wrote letters, called the media and posted 20,000 tweets in 24 hours to express their shock at being blamed for the government’s fiscal ineptitude?

Lastly, Mr Prentice said he may have expressed himself inarticulately but he’d take responsibility for his comments. Oh good, let’s take heart in the fact a ventriloquist isn’t putting words in Charlie McCarthy’s mouth.

The joke is on us

Mr Prentice will not apologise. He thinks our outrage is a joke.

At the Manning Networking conference in Ottawa (aka the Conservative hive mind) he couldn’t resist cracking a joke about the makeup artist who’d readied him for an interview. She asked if he wanted to remove his make up in a mirror. He replied “No, no, I don’t. Stop talking about mirrors.”

The Conservative audience thought he was hilarious.

This is the third time in three months that Mr Prentice gravely misjudged Albertans.

He thought they’d accept his gay-straight alliance bill as supporting parental rights. They said it was discriminatory. He thought they’d see the defection of the Wildrose 11 as the unification of the right. They said it was undemocratic. And he thought his “look in the mirror” message would deflect Albertans’ attention from Tory fiscal mismanagement. It insulted their intelligence.

Democracy and accountability are not a joke.

But until Mr Prentice figures this out, would someone clean up his Message Event Proposal template before he says something even more arrogant and patronizing?

39 Responses to “Look in the Mirror”