Posted on March 15, 2015 by susanonthesoapbox

On Friday Liberal MLA Laurie Blakeman announced that she’ll be running as a candidate for the Liberals, the Alberta Party and the Greens in the upcoming election…

…and on Sunday Ms Soapbox announced to her dad that she’d joined the NDP.  He swears he’ll never speak to her again.

While I applaud the efforts of progressive MLAs and party leaders to cooperate I fail to understand how Ms Blakeman’s decision gets the progressives anywhere.

As journalist Graham Thomson points out this isn’t a merger of the Liberals, the Alberta Party and the Greens and it’s not a strategy for province-wide cooperation to reduce vote splitting since it affects only Ms Blakeman’s riding—which she’s held since 1997.*

So if Ms Blakeman isn’t proposing a merger or a cooperation strategy, what is she proposing?

Unfortunately that’s not the case.  And Ms Blakeman would know this if she’d bothered to read the Alberta Party and Green party’s policies before she stepped off into the abyss.

Even a quick read of the three parties’ policies reveals a shocking lack of alignment particularly in the case of the Alberta Party. If I’ve misread any party’s policies, please let me know.

Democratic reform: the Liberals propose “instant run-off” elections (the voter picks his first, second and third choice candidates) where no candidate captures 50% of the vote. The Greens support proportional representation while the Alberta Party sticks to the status quo offering little more than platitudes requiring MLAs to listen to their constituents and not be top-down driven.

Energy:  The Liberals support oilsands expansion and pipeline construction on the condition that such activities are carried out under stricter environmental oversight.  The Greens want a moratorium on oilsands activity until better environmental regulations are in place.

The Alberta Party calls for balance between a robust energy industry and sustainable development, promising to develop policies that reflect the energy sector’s need for certainty, stability, the need to be competitive on a global scale and an “adequate” return on investment.

Think about that for a moment.

The Alberta Party promises an energy future that safeguards Big Oil’s global competitiveness and guarantees an “adequate” return on investment.

The Alberta Party of Alberta Logo

Aside from the obvious question—why is it Albertans’ responsibility to subsidize Big Oil in the lean years—the Alberta Party policy will obliterate the free market, or what’s left of it, by using the government to protect Big Oil’s profit margins. Welcome to the petrostate.

Health:  The Liberals and the Greens support publicly funded and publicly delivered healthcare.

The Alberta Party supports publicly funded healthcare, but is curiously silent about whether healthcare should be publicly or privately delivered, saying only that the present system isn’t working and we need something better. When Ms Soapbox raised the issue of public versus private delivery of healthcare with Alberta Party leader Greg Clark he was noncommittal.

Ms Blakeman is deeply concerned that the Conservatives will win 80 out of 87 ridings in the next election.  She’s stepped up with a symbolic gesture to offer hope to progressive voters across the province.

Unfortunately she’s created confusion.  Instead of throwing her support behind the NDP who together with the Liberals could make a real difference in Alberta (they would have gained five additional seats had they worked together in 2012 and 2014) Ms Blakeman chose to represent two tiny parties.

Given the lack of policy alignment among these parties Ms Blakeman is hamstrung when it comes to taking a clear position on the critical issues facing Albertans.  She has only two options: make it up on the fly or say vote for me, I’m a shiny new consolidated party of one. 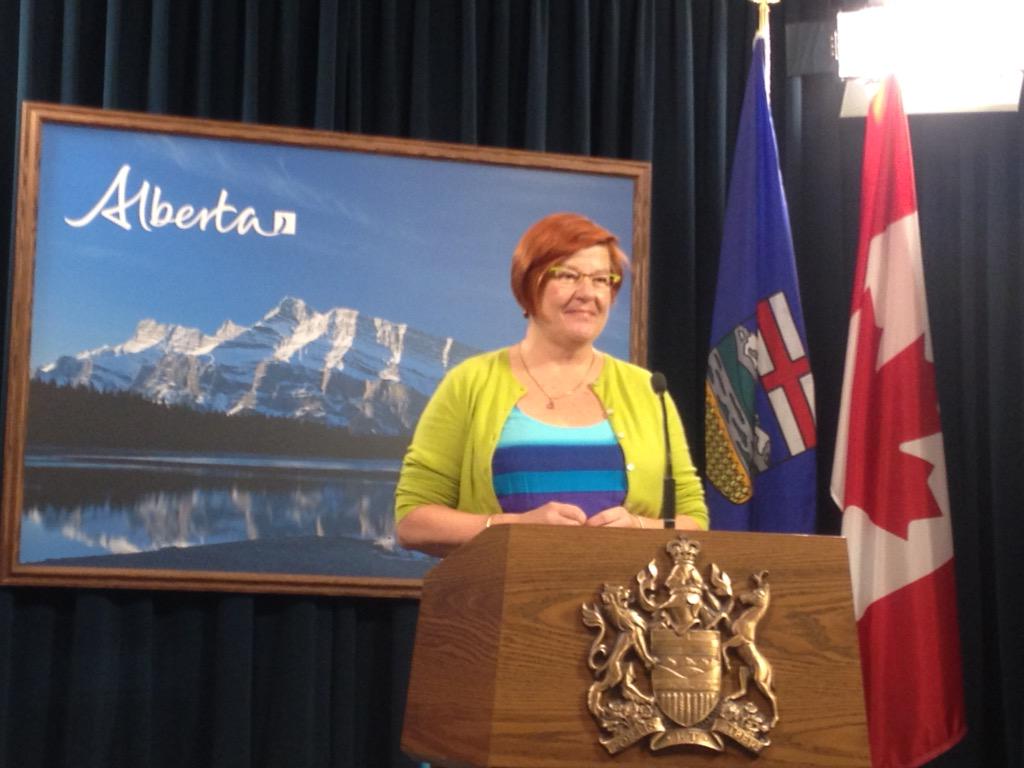 Perhaps Ms Blakeman thrives on ambiguity.  When asked which party’s caucus she would join after the election, she replied “That depends on how many there are, and I have no idea how that’s going to work out after the election.”*

Or perhaps Ms Blakeman is comfortable with Alberta Party policies and is simply being coy. When she made her announcement she chose to wear Alberta Party colours not Liberal red.**

Ms Soapbox cannot support a Liberal who adopts PC Lite policies and leaves nothing but confusion in her wake. And while Ms Soapbox respects her Liberal and Green friends she is shifting her support to the party with an inspirational leader, Rachel Notley, clearly defined progressive policies and forward momentum.

After the next election Ms Blakeman may be wearing Alberta Party blue, green and mustard yellow, but Ms Soapbox will be sporting NDP orange.