A Little Story About Character

Posted on March 17, 2019 by susanonthesoapbox

Sometimes it’s the little stories that move us.

Last week Mr and Ms Soapbox attended a fundraiser for Rachel Notley.  It was hosted by a group of Calgary lawyers at a swanky downtown restaurant.  Lawyers, business people and representatives from the non-profit sector chatted over appetizers and wine.

During the mix-and-mingle part we talked with people who said yes times were tough, no they hadn’t seen the slump coming, yes Rachel had done a remarkable job under trying circumstances and no there’s nothing Jason Kenney could do that would make a difference (going to war with the Feds might convince his base he’s “doing something” but churning up fear and loathing is not a successful long term strategy).

At these events it’s usually Rachel, not the person who introduces her, who sticks in your mind, but this time it was slightly different.

Rachel was introduced by a soft spoken lawyer named Carsten Jensen.  Mr Jensen is a well respected litigator with an international reputation which includes a stint at the United Nations Compensation Commission in Geneva where he settled compensation claims arising from Iraq’s invasion of Kuwait.

He and Rachel have a shared history.  They both grew up in small towns in northern Alberta, both went away to university in Toronto and both became lawyers who pursued dramatically different career paths.

There’s another difference:  Mr Jensen is gay.  He said it wasn’t easy growing up gay in small-town Alberta, but he believed life would be better when he moved to the big city.  He was wrong.  His roommate threw him out when he found out Carsten was gay.  Rachel invited Carsten to move in with her, he accepted and stayed for a year. 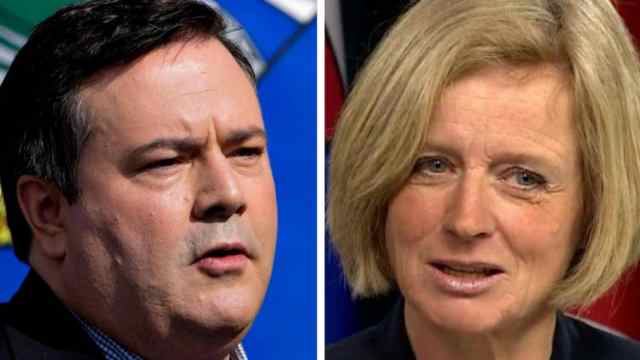 Who has the character to lead Alberta?

Let’s pause there to consider another little story about someone’s university days.  This one is told by Jason Kenney.

When Jason Kenney was in university in San Francisco, he campaigned to prevent gay men from visiting their partners who were hospitalized and dying of AIDS; ensuring that many who were shunned by their families would die alone.  We know this story because Mr Kenney told us about it in a speech he gave as a young federal MP.  He proudly referred to this episode as a “battle” that brought him “closer to the heart of the Church in the spiritual sense.”

When no one is watching

Coach and former basketball player John Wooden said, “…the true test of a man’s character is what he does when no one is watching.”

The premier of Alberta has the power to implement sweeping social policies that ease suffering and bring peace of mind to Albertans or turn their lives into unmitigated misery.

Which leader should become the next premier of Alberta?  The one who reaches out to her gay friend when no one is watching or the one who boasts about doing everything he can to ensure gay men die alone.

NOTE TO READERS: Ms Soapbox is out of town to celebrate the life of a friend.  It was while thinking about that life that she remembered the power of “little stories”.

68 Responses to A Little Story About Character