Posted on September 30, 2018 by susanonthesoapbox

The Kavanaugh confirmation hearing is like a mirror shattering on the floor, shards of glass are flying every where and women are demanding accountability.

Everyone knows about the two women who confronted Senator Jeff Flake in an elevator and demanded he think carefully about the message he’s sending women by voting in favour of confirmation. 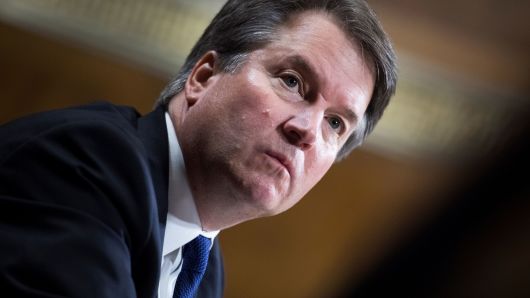 On Sept 26, columnist Naomi Lakritz said the Kavanaugh hearing should “strike fear into the hearts of all men because it means no matter how sterling a reputation you have in your adult life and career, something dumb you may or may not have been involved in high school can forever come back to haunt you.”

The Herald says the column received “social media backlash”, local and national media called for comments, and two city councillors, Druh Farrell and Jyoti Gondek announced they would not respond to interview requests from Herald reporters.  (A third councillor, Gian-Carlo Carra, later made a similar announcement).

Gondek* is crystal clear about why she’s suspending interaction with the Herald.  She says it’s irresponsible to normalize sexual assault and disagrees with the Herald’s decision to print the column under the headline: “What happened in high school stays in high school”.

A day or so after Gondek announced her decision, she and the Herald leadership talked on the phone.  Gondek says they came to understand each other’s perspectives and are sorting through next steps.  She hopes Calgarians “can have a broader conversation about the state of journalism in a time of social media and polarizing global politics” and suggested journalists engage with citizens “to re-establish mutual expectations.”

This is a laudable goal on Gondek’s part, however it is doubtful the Herald will rise to the challenge.

On Sept 26 it published an editorial entitled “Free speech for all, including victims of sexual misconduct” where it said it did not agree with the Lakritz column but justified publishing it because editorial pages are intended to reflect a variety of opinions and stir debate so that “published ideas become part of the larger discussion.”

On Sept 29 it took a more aggressive stance with an editorial entitled “Importance of Free Speech” and declared, “We will not apologize.  We are a platform for free speech”.  The editorial included a reference to the Charter which protects “freedom of thought, belief, opinion and expression, including freedom of the press and other media of communication” and a quote from the Canadian Civil Liberties Association (“It is only through exposure to different ideas and opinion that each person can make their own informed choices about their core beliefs.”)  The Herald said publishing the Lakritz column and two other columns that strongly disagreed with it was a privilege and a sacred trust and it would stand by its columnists’ right to express their opinions “and no amount of pressure from social media will change that.”

The Sept 29 editorial is bizarre for a number of reasons:

(1) No one is demanding an apology.  The Herald’s righteous refusal to offer one is a red herring that simply confuses the issue.

(2) Invoking the Charter in this context is meaningless.  The Charter protects freedom of expression, including freedom of the press and other media, from infringement by the government (incidentally, such protection is not absolute, the government can infringe our Charter rights with laws that are demonstrably justified in a free and democratic society).  Gondek and others, including the advertiser who objected to its ad running beside the Lakritz column, do not have the power to infringe the Herald’s freedom of speech.  However, they can galvanize public support for their opinion that the Herald acted irresponsibly and this could negatively impact advertiser and subscription revenues.

(3) Cherry picking a quote from Canadian Civil Liberties Association is disingenuous for a newspaper that often finds itself on the wrong side of CCLA causes like protecting LBGTQ rights and opposing what the CCLA calls “religious indoctrination” in public schools.

(4) The issue isn’t whether Lakritz should be free to express her opinion, but whether the Herald acted irresponsibly when it published Lakritz’s opinion in a format Gondek and others say normalizes sexual assault.

Where does this leave us?

Gondek says “we need to understand the significance of the words we choose, and the responsibility we carry when we express our sentiments publicly, regardless of the medium.”

This is particularly true for journalists who, in the words of veteran newspaper editor Neil Reynolds, are in a position to right wrongs and tell stories that bear witness to all that is universally human.

We live in difficult times.  We need newspaper editors like Neil Reynolds and citizens like Jyoti Gondek now more than ever.