Go to Scotland, learn about Canada

Posted on September 17, 2017 by susanonthesoapbox

Ms Soapbox and her eldest daughter “Missy” just returned from a 10 day trip to Scotland.  We explored Edinburgh (refined and dignified), Glasgow (gritty and boisterous) and the Highlands (majestic and dangerous). 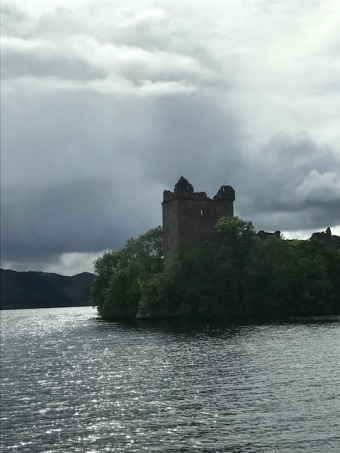 Along the way something magical happened.  We learned about Scotland, but we learned even more about Canada.

The Scottish are understandably proud of their history, having survived invasion after invasion since the first century.  Consequently, we expected our tour of the National Museum of Scotland in Edinburgh to be heavy on ancient Scottish artifacts and light on everything else.  However, the first exhibit we saw was a magnificent First Nations Thunderbird costume.  Our guide started the tour with the Thunderbird because it was an exceptional object that had been created by one of the oldest cultures on earth.

This reverence for Canada’s First Nations was echoed by exhibits in the Kelvingrove Art Gallery and Museum in Glasgow.

It was not lost on Ms Soapbox that the Scottish show more respect for Canada’s First Nations than many Canadians.

Be honest about your past

Scotland recently recognized its role in the slave trade–Scottish tobacco merchants became incredibly wealthy by participating in the triangle of trade that carried consumer goods and human cargo back and forth between Britain and Europe, the Caribbean and America.

Canada is only now coming to terms with its treatment of First Nations, Metis and Inuit.  The Truth and Reconciliation Commission is but a baby step toward addressing the consequences of decades of mistreatment and neglect.

Glasgow is the largest city in Scotland.  It was once the centre of the world’s shipbuilding industry, having over 150 shipyards.  After WW2 the industry could no longer compete in a changing market place and Glasgow gradually transformed itself from a dying city to a dynamic one focused on financial services and tourism.

Canada’s dependence on natural resources, particularly oil, will become problematic as the world shifts to renewable energy.   Politicians who insist that the path forward is to go backward have not learned that change is inevitable and it’s better to be prepared than left behind.

In addition to remarkable architecture, Edinburgh and Glasgow are packed with museums, art galleries, science centres, and public art.  This gives them a vibrancy that attracts tourists and charms the locals despite the gloomy weather.

The Scots cherish their artists, writers, and poets.  The tallest statue in Glasgow’s George Square isn’t a member of royalty, a politician, or an industrialist; it’s the poet and writer Sir Walter Scott.  Scott is credited with softening the harsh view Britain had of Scotland (in Scott’s day Britain outlawed the wearing of tartan and playing bag pipes) by creating an extravaganza to honour King George IV on his first visit to Scotland.  The highlight of Scott’s program was the King dressed in tartan being greeted by a crowd of tartan clad admirers.  That was the end of Britain’s ban on tartan and the start of the tartan fashion fad.

The Scottish admire all forms of art.  The street artist Sam Bates (a.k.a. SMUG) created a spray can mural of St Mungo, Glasgow’s patron saint, on the side of a building.  St Mungo is depicted in contemporary dress and could easily be mistaken for a homeless person.

Since the 1980s the statue of the Duke of Wellington has worn a traffic cone hat.  City staff remove the cone and pranksters put it back.  A few years ago, the City decided to elevate the statue so the pranksters couldn’t replace the cone.  When Glaswegians learned about the plan they signed petitions and staged protests until the City backed down. 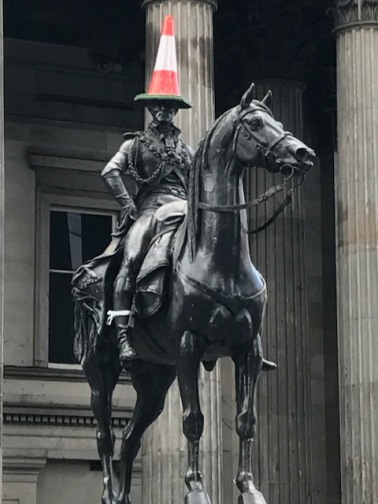 Canadians, like the Scots, believe the arts and culture are important, however Albertans are less whimsical and more grumpy about what qualifies as “art” and whether their hard earned tax dollars should be spent (wasted) on it.

Ms Soapbox and Missy were constantly asked where we were from.  When we said we were Canadians we were greeted with warm smiles and stories about “a certain American president” who doesn’t understand that climate change is real and “bloody Americans” who have a melt down when a tour bus is delayed due to roadworks.

We learned many things.  Scotland and Canada share the same ancient geology (Scotland was a part of Canada before continental drift), and that the reason we can’t understand the people of Cape Breton is because they speak Gaelic, and that John A MacDonald, our first prime minister, and James McGill, the founder of McGill University, were born in Glasgow.

It’s not every day that the people of a foreign country can show you how to improve your own country while at the same time make you feel good about who you are.

Like Loading...
This entry was posted in Vacation and tagged Duke of Wellingon's hat, Edinburgh, Glasgow, Scotland, Thunderbird costume. Bookmark the permalink.

29 Responses to Go to Scotland, learn about Canada