Posted on September 3, 2017 by susanonthesoapbox

The UCP leadership race just began and already we’re being asked to choose between two conflicting versions of the truth.

Jason Kenney says Brian Jean is a poor financial manager because Jean created a $337,000 deficit in the UCP caucus budget–apparently Jean embarked on a “massive hiring spree” to run a “shadow leadership campaign” at the taxpayers’ expense.

Brian Jean says nonsense, there is no deficit and accuses Kenney of “mud-slinging and innuendo”. 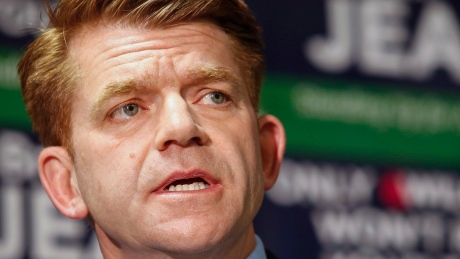 The erosion of truth

In his book On Tyranny, Yale professor Timothy Snyder offers an analysis of what happens when the electorate is barraged by competing versions of the truth (aka lies).

Snyder’s focus is national politics, but his observations are relevant at the sub-national or provincial level too.

Here’s how Snyder’s analysis applies to the erosion of truth in Alberta politics.

Presenting inventions and lies as facts

Bearing in mind Kenney’s loosey goosey understanding of percentages, one should be wary of his claim that Jean created a $337,000 hole in the UCP caucus budget.

But is Jean telling the truth when he says there is no deficit?

The real truth here is math is hard, especially for politicians who torture numbers until they say exactly what they want them to say.

Snyder describes a number of other tactics used by politicians to bend the truth.

Both Jean and Kenney are quick to berate Alberta’s “accidental NDP government” (insulting all the voters who intentionally marked the NDP box on their ballots).

They characterize every NDP policy from the royalty review to the curriculum update as “ideologically driven”.  They promise hand over heart to repeal every NDP policy when the UCP forms government.

The repetition of “accidental government” and “ideologically driven” obscures the fact that the royalty review was led by well respected experts and endorsed by the energy sector and a 30 year old curriculum cannot prepare our children for jobs in the 21st century.

Albertans trying to decide between Jean or Kenney need to ignore mindless incantations and demand concrete action plans.  Otherwise they’ll end up electing a UCP leader whose chances of success as Alberta’s premier are as likely as Trump building that damn wall.

He promises to cut the budget by $2.6 billion by reducing the number of managers in the system.  He’d start with Alberta Health Services (AHS).

The AHS org chart shows one CEO, 13 VPs and 54 people or entities reporting to the VPs.  Assuming Jean fires half the VPs and half their direct reports he’ll save around $4 million.  If a $4 million reduction is the best he can do with a department that’s almost three times larger than the next biggest department it’s difficult to see how he’ll reach his target of $2.6 billion without dipping down into the front lines of education, transportation, seniors, etc.

Kenney promises to restore the Alberta Advantage and put Albertans back to work by cutting taxes on oil companies, restoring coal to its former glory, eliminating the carbon levy, and suing the feds for imposing the federal carbon tax in 2018.

Reducing taxes won’t raise the global oil price or bring back oil companies who’ve left the oil sands in favour of cheaper US shale plays.  Ottawa will phase out coal by 2030 and there are no guarantees that Alberta will win in a law suit against the feds.  So what’s Plan B…never mind, it’s magical thinking.

Magical thinking leads to decisions made on faith, not logic.  Snyder says Trump is a prime example, Trump convinced his followers that only he can solve America’s problems (“Believe me”).

Jean and Kenney continue to tell Albertans their lives are ones of quiet desperation.  And only they can fix it by fighting Trudeau to ensure Alberta’s oil gets to foreign markets (the fact that Trudeau has already approved two pipelines is irrelevant).

They describe Alberta as a hapless victim, a wasteland of empty buildings and derelict cars.

They ignore the fact that Alberta is leading the country out of recession.  Factory sales are up 18%, retail sales up 9%, average weekly wages up 1.7%, GDP up 2.9% (and rising) and unemployment down 7.4%.

Given these facts why do Jean and Kenney continue to spout their nonsense?

Snyder puts it like this.  Nationalistic politicians are not interested in the real world.  Their focus is power, victory, defeat and revenge.

Hey, it worked for Trump, it might work for the leader of the UCP.

53 Responses to How Truth Dies