Posted on February 7, 2016 by susanonthesoapbox

Last week Justin Trudeau walked into the lion’s den—a boardroom filled with the country’s top oilpatch executives—and got it half right.

Luckily he had the good sense to take Premier Notley with him.

Mr Trudeau, Ms Notley and Big Oil discussed low oil prices, the lack of pipelines to move product to tidewater and the impact all this has on employment and the economy for Alberta and Canada.

Big Oil said the meetings were very encouraging, which is curious given that Big Oil did not get the one thing it was looking for—assurance that Cabinet would approve the Energy East and Trans Mountain pipelines, both of which are before the National Energy Board (NEB) right now.

Mr Trudeau said he would not “politicize” the NEB process by prejudging or short cutting it.  He would allow the NEB to do its job without political interference.

With that he slid into the gray zone.

Mr Trudeau is right.  He cannot guarantee approval.  He’s also correct that signalling the “right answer” to the NEB would preempt its process;  however as a result of the changes put in place by ex-PM, Stephen Harper, the only way to further politicize the NEB would be to move it into the PMO’s office.

When Stephen Harper cottoned on to this glitch he amended the NEB Act. He made the NEB submit recommendations for refusal as well as approval to Cabinet and gave Cabinet the power to send the NEB’s recommendation back twice for reconsideration. The reconsideration order could require the NEB to take into account any factors specified by Cabinet.

In other words Harper gave Cabinet the power to second guess the NEB and force it to come up with the “right answer”.

Mr Trudeau inherited Mr Harper’s NEB. He and his Cabinet are free to decide whether a pipeline goes ahead or not for whatever reason they please. If that isn’t a politicized process I don’t know what is.

Perhaps the real reason Mr Trudeau doesn’t want to signal “yea” or “nay” for Energy East and Trans Mountain is that he doesn’t want to violate his commitment to a leadership style that respects the independence of his cabinet ministers.

A recent example of this non-Harper style is Mr Trudeau’s reluctance to wring Natural Resources minister, Jim Carr’s neck for saying “of course” pipeline approval is a political process when Mr Trudeau says it’s not.

Having declared his support for an unpoliticized NEB process and the independence of his cabinet ministers one has to wonder about the government’s decision to overlay the NEB process with a new process.

The process is based on five principles:

Principles 2, 3, and 4 are an attempt to strengthen existing NEB processes, principle 5 is overreaching and this is a concern.

Trudeau could learn from Notley

Mr Trudeau, like Ms Notley, believes that a healthy environment and a strong economy are two sides of the same coin.

However Mr Trudeau appears to place a heavier emphasis on addressing climate change than supporting the energy industry.  Ms Notley tries to balance the two while at the same time transitioning Canada to renewables. 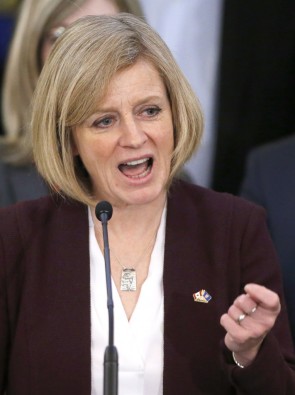 Yes, we should cut Mr Trudeau some slack. It takes time to round up the premiers and hammer out a national energy policy and a national climate change policy, but in the interim Mr Trudeau should take a page from Ms Notley’s book (she supported Energy East and Trans Mountain; Deron Bilous, her minister of economic development wrote an op-ed lauding the benefits of “a thriving energy sector, managed in an environmentally responsible way”).

And yes, these are just words, but the next time Mr Trudeau is asked whether he’d support Energy East/Trans Mountain, would it kill him to say: IF the NEB recommends approval AND Cabinet is satisfied the requirements of the new GHG review process are met, then Cabinet MAY be favourably disposed towards them.”

Or are we in the twilight zone and is Orange the new Red and Red the new Green?

14 Responses to Trudeau On Pipelines: Maybe