“What Makes Canada So Great?”

Posted on February 16, 2014 by susanonthesoapbox

Michaela Pereira, CNN television personality and news anchor (I use the term loosely)  asked a member of the Canadian Olympic skiing team this question:  “What makes Canada so great?”

My immediate reaction was:  What a goofy question.  Luckily the Canadian athlete had more tact.  He replied: “Teamwork”.

He may be on to something, something that’s much bigger than 17 days in Sochi. 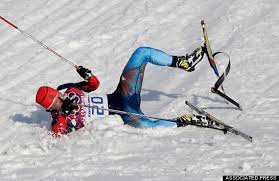 By now we’ve all heard the story about Canadian coach Justin Wadsworth who climbed over two snow banks to give Russian skier Anton Gafarov a new ski when his own disintegrated in the free sprint.  Wadsworth saw Gafarov dragging himself to the finish line while everyone, including the Russian coaches, stood on the sidelines, staring.  Wadsworth came to Gafarov’s rescue because he wanted the Russian athlete to finish the race with dignity.

Wadsworth, an American by birth, reacted to all the media attention in a typically Canadian way—he was surprised and embarrassed.  When a reporter told him that his actions reflected the real Olympics, Wadsworth laughed and said “That makes me feel better because the rest of our day was total s—“.*

Then we have Gilmore Junio, the 23 year old Calgarian who gave up his spot in the 1000 metre speed skating competition to Denny Morrison.  Morrison fell in the Olympic trials in December and failed to make the cut.

Junio stepped aside because he wanted “what was best for the team, what gave us the best chance to win”. His brother Jerry said “The thing that [Gil] wants to do is represent Canada in the best way.  And I think he did that”.**  No kidding!

Twelve members of Junio’s family watched Morrison skate in Junio’s place.  They screamed and cheered as if it were their boy out there on the ice.  Morrison took the silver medal, crossing the finish line five-hundredths of a second behind Dutch skater Stefan Groothuis.

Sure, Morrison would have been happy to win the gold, but he said, with typical Canadian candor, “I’m pretty satisfied with silver, to be honest.” ***

What makes Canada so great?

So to answer the CNN reporter’s question (bear with me here we’re veering off into constitutional law) what makes Canada is great is POGG.

Section 91 of the Canadian Constitution requires the country to be governed by the principles of peace, order and good  government (affectionately known in legal circles as POGG).  This creates a very different ethos in Canada than the US where life, liberty and the pursuit of happiness is enshrined in the Declaration of Independence and is highly valued by Republicans and Democrats alike.

Unfortunately our prime minister is not on the same page as the Constitution or most Canadians.  In Mr Harper’s view Canada is a nation of taxpayers who spend every waking moment wondering whether their tax dollars are being “wasted” on some undeserving sod who was born on the wrong side of the tracks or managed to get lost over there.  (And no, Mr Harper, dressing up this selfishness as “consumerism” does not make it any more attractive.  It’s still petty and lacks compassion).

Coach Wadsworth spoke about giving Gafarov a chance to end his race with dignity.  Speed skater Julio characterized his decision to step aside not as a “sacrifice” but as a way to show leadership and give back to his country.**

These unselfish acts are inspiring to all Canadians because they reflect who we are—a nation filled with unselfish people who aspire to greatness and won’t sacrifice each other to get there.

And no one can take that away from us, unless we let them.

37 Responses to “What Makes Canada So Great?”