Throne Speech: Whose Destiny Are We Talking About?

All eyes were riveted on Lois Mitchell, Her Honour the Honourable the Lieutenant Governor, last Wednesday as she delivered the Kenney government’s first Throne Speech…er…your eyes weren’t riveted on HHHLG? You were having coffee with a friend like I was, but you read it later online…right? No?

Never mind, you didn’t miss anything that you hadn’t already heard in one form or another on the UCP campaign trail. 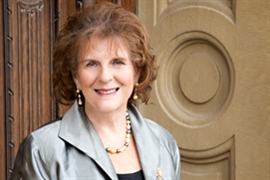 Over the next few months we’ll have a chance to examine these promises in the cold light of day.

But before we start, let’s address this silly preoccupation the media has with the “brevity” of the Kenney version—the media said at six pages it was a “welcome relief from typically windy Canadian speeches full of rhetorical gales and partisanship.”  Just to set the record straight, the Kenney version at 2065 words was longer than Notley’s inaugural throne speech (1487 words) and shorter than Lougheed’s inaugural throne speech (3388 words), but who cares.

Contrary to what the media thinks, in politics, like life, size doesn’t matter; it’s the ability to deliver on the promise, in this case the promise to drag the province back from the brink of disaster.

Both Lougheed and Notley acknowledged the accomplishments of the governments that had preceded them.  Lougheed confirmed that sound existing programs would be continued.  Notley promised to adhere to PC principles which fought to preserve provincial jurisdiction over energy resources and recognized that energy resources are a trust.  Apparently, Kenney’s government arrived like the Birth of Venus, complete and untouched by anything that had gone before.

Both Lougheed and Notley focused their legislative priorities on people.

Lougheed stressed the importance of “environmental control” and promised to strengthen and revamp the Clean Air Act, the Clean Water Act and the Water Resources Act.  Notley promised to show leadership on the environment and climate change while creating conditions for a diversified, sustainable economy.

Kenney mentioned improving life for all Albertans, but focused on the economy and standing up for the province in the pipeline fight.  His concern for people was quickly overshadowed by talk about malevolent forces besetting Alberta which required the government to create agencies to tell the truth about the energy industry and conduct public inquiries into foreign funds campaigning against Alberta energy.

Lougheed’s Bill 1 introduced the Alberta Bill of Rights.  Notley’s Bill 1 advanced democratic renewal by banning corporate and union donations to political parties.  Kenney’s Bill 1 repealed the carbon tax, he promised to “protect Albertans” by suing the feds if they tried to impose a federal carbon tax.

Lougheed viewed change “not with fear and apprehension, but with optimism, with a sense of challenge and of opportunities to be grasped.”  He was convinced Albertans were up for new programs, policies, innovations and reforms.  Notley shared Lougheed’s view, describing Albertans as optimistic, hopeful, entrepreneurial, diverse and community-minded, people who share big dreams of a better life.

Kenney described Albertans as having unstoppable will, energy and talent, but always in the context of the economy.  He described Albertans as “stewards of a great tradition of ordered liberty” who “consistently applied the principles of free enterprise, free markets, equality of opportunity, and prudent stewardship to optimize our God-given gifts.”

The message to Albertans is they’re valued as part of the economic machine; not necessarily as individuals who dream of a meaningful life.

Kenney, or rather HHHLG on his behalf, closed the Throne Speech with a call to arms:  Albertans have overcome economic hardship, political enmity, and natural disasters.  Our success, resiliency and untapped potential will attract talented newcomers and we will defeat the “political forces standing in the way of this inevitable destiny”.  In fact, our economic growth “secures the wealth and prosperity of Confederation” and it is “our duty and our destiny to renew Alberta’s role as an economic and political leader within Canada.”

What exactly is our duty and destiny?

How are we going to ascend to our rightful position as an economic leader within Canada when our economy is firmly tethered to fluctuating global oil prices?  How will we achieve our destiny as a political leader in Canada when that requires increasing our population by five-fold to neutralize the combined population of Ontario and Quebec?

Oh, wait a minute.  Maybe the throne speech isn’t about Alberta’s destiny after all. Maybe it’s about Mr Kenney’s destiny, in which case all these concerns are irrelevant.

All this talk about “destiny” reminds me of that delightful scene in Back to the Future where George McFly tries to impress Lorraine (Marty McFly’s soon-to-be mom) by saying:  I am your “density”.  She says: What?  He says: I’m your “density”…I mean, your destiny.

Albertans have the potential to live meaningful lives…assuming they aren’t so dense they let themselves get ambushed by a premier intent on fulfilling his destiny at their expense.

This entry was posted in Politics and Government, Uncategorized and tagged Back to the Future, Destiny, Jason Kenney, Marty McFly, Peter Lougheed, Rachel Notley. Bookmark the permalink.

28 Responses to Throne Speech: Whose Destiny Are We Talking About?