Posted on May 6, 2018 by susanonthesoapbox

This would be funny in the ironic ha-ha sense if it wasn’t so damned serious.

While the rest of us were watching UCP members debate policy resolutions in a conference hall in Red Deer, Handmaids for Kenney stood silently outside the convention hall and quickly discovered just how unprincipled and ideologically flabby Jason Kenney and the UCP really are.

Handmaids for Kenney are political activists who take their name from Margaret Atwood’s book, The Handmaid’s Tale. Their twitter account @HandmaidAlberta is “dedicated to the promotion & passive acceptance of a future Handmaid lifestyle in Jason Kenney’s UCP Alberta.”  Their feed is full of ironic and cutting observations of life in UCP land.

Four women in red robes and snowy white bonnets stood quietly outside the convention hall.  They carried a handwritten sign saying, “The Handmaid’s Tale is NOT an instruction manual.”  They did not interfere with UCP supporters streaming into the convention hall and yet their presence was too much for the UCP who forced the Handmaids to back off 50 metres.  Presumably the UCP’s right to gaze upon metropolitan Red Deer trumped the Handmaids’ rights of free speech and assembly. 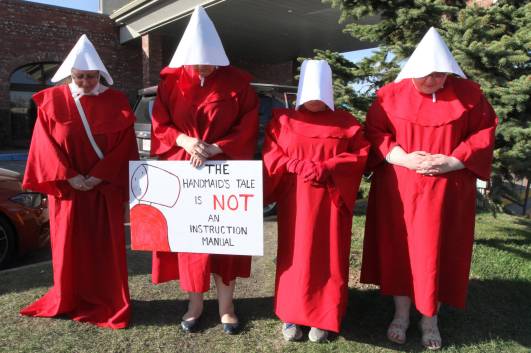 The UCP’s inability to tolerate the Handmaids presence is even more ludicrous given the fact every member of the UCP caucus walked out of the Legislature last week to avoid debating a bill that would impose a 50-metre bubble zone around abortion clinics.  The bubble zone is intended to protect women and healthcare practitioners from aggressive antiabortion protesters.

Kenney said the UCP MLAs walked off the job because:

The only reason for Kenney to fret about the legislation being “divisive” is the debate would reveal divisions within his own party.  His far-right supporters would expect their MLAs to condemn abortion clinics as yet another indication of a “promiscuous lifestyle” (not on my dime, thank you very much!);  while his moderate supporters would expect their MLAs to argue the legislation was unnecessary in the face of existing injunctions and would negatively impact protesters’ freedom of speech and assembly.

Rather than incur the wrath of a segment of his base or risk another UCP MLA popping off in a bozo eruption, Kenney pulled his MLAs out of the debate.

This flagrant abuse of process demonstrates Kenney’s belief that democratic principles are relative.  Principles are tested by context and will be upheld (or not) depending on who or what the UCP is protecting.  If showing up in your capacity as the Official Opposition might get messy, then ditch your duty and run away.  If four women bearing silent witness offends your conservative sensibilities, then ditch your “belief” in the freedom of speech and assembly and get rid of them.

Kenney says he’ll run the policy resolutions through a non-party “platform committee” to create a “winning platform” because a Kenney government will serve not just the 120,000 UCP members but all 4 million Albertans.

This is a laudable statement but consider Kenney’s actions in the abortion clinic bubble zone debate.  Kenney pulled 25 MLAs out of the debate, leaving more than 1 million Albertans unrepresented (25 MLAs with constituencies averaging 46,000) rather than risk offending a segment of his base.

And if that doesn’t give you pause, consider the UCP’s treatment of the Handmaids who were standing quietly outside the conference hall while former Wildrose leader Heather Forsyth told an appreciative crowd that feminism is an “f-word”, Rachel Notley’s gender-balanced cabinet was “patronizing” and the idea that there are barriers to women in politics was “crap”.

The Handmaids respect the dignity of women; the UCP…not so much.

24 Responses to Handmaids For Kenney Attend The UCP Policy Convention