The Magical Thinkers: Horgan and Kenney

Posted on February 25, 2018 by susanonthesoapbox

I’m not sure what’s more bizarre, BC Premier John Horgan’s rationale for asking the BC Supreme Court to rule on whether BC can limit the amount of diluted bitumen flowing on Trans Mountain or Jason Kenney’s reaction to Horgan’s decision to take the issue to court.

Horgan defended his decision to refer the matter to court by saying:  “Resources fall to the province, but trans-boundary issues are a federal responsibility.  But once the boundary is crossed…into British Columbia…the government of British Columbia has the jurisdiction.”

Under this logic, diluted bitumen molecules entering the Trans Mountain pipeline in Alberta are under provincial jurisdiction while they flow through Alberta, magically flip to federal jurisdiction for a nanosecond as they cross the border, and magically flip back to provincial jurisdiction when they land on the BC side.  (Lawyers are extremely creative people, but God help the poor sucker assigned to draft this notice of reference under the BC Constitutional Questions Act). 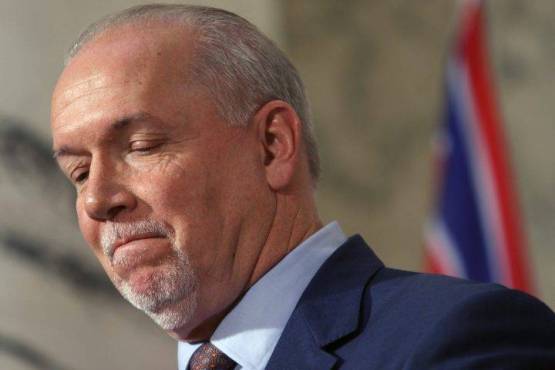 Rachel Notley reacted to Horgan’s decision by reiterating that interprovincial pipelines fall within federal jurisdiction; but lifted the wine boycott because BC had stepped back from its initial position.  Trans Mountain said it was pleased BC changed its mind on the proposed regulations.  And the federal government declined to participate in BC’s reference calling it “groundless”.

While Notley, the feds and Trans Mountain see BC’s move as a small step in the right direction, Jason Kenney said Alberta had folded under BC’s superior legal strategy.  He held a press conference to outline why this was the case.

Kenney praised Horgan’s decision saying BC was playing the long game (chess) while Alberta was playing the short game (checkers).  A reporter characterized this as “tough words”; but failed to ask Kenney why BC’s strategy was a good one when legal scholars across the country insist it is wrong at law.

Kenney said the judicial reference was a delay tactic and referred to an old polygamy case that took years to work its way up to the Supreme Court of Canada.  It’s true that difficult cases take time to resolve, however, if the legal scholars are correct the trial court should dismiss BC’s case and the appellate court should refuse to hear an appeal.  The case would be over before it started.

Kenney said Notley should reinstate the wine boycott and add further retaliatory measures suggested by the UCP.  No one asked Kenney to explain how the Alberta government could force pipeline companies to shut off shipments to BC when this would cause pipeline companies to violate contracts with their oil and gas shippers and expose Alberta’s largest industry to massive breach of contract lawsuits.

Kenney accused Alberta of backing off and giving BC what it wants; but failed to explain what Alberta could do to stop BC from referring the matter to BC courts under BC legislation.

He called on Notley to demand the federal government step in and act in Alberta’s “economic interest” by invoking Section 92(10)(c) of The Constitution Act and declare Trans Mountain to be in the national interest in order to put an end to any delay tactics.

What?  Section 92 (10)(c) gives the federal government the power to pass a law declaring certain “works” which provincially regulated and wholly situated within a province, to be for the general advantage of Canada.

So, what exactly does Kenney want the federal government to do…take a federally regulated pipeline, transfer it to the province of BC and then invoke Section 92(10)(c) to transfer it back to federal jurisdiction?

Kenney’s press conference would have been newsworthy if it had been a call to action supported by fresh ideas, instead it was a repeat of his desire for an all-party motion that would (1) call on BC to stop this “anti-energy, anti-development” strategy, (2) support a fight-back strategy and (3) call on Justin Trudeau to stop the “trade war” by invoking a federal constitutional power (apparently in the heat of the moment Kenney forgot Notley has already done (1) and (2) and the federal government doesn’t wade into “trade wars” between provinces because Section 92(10)(c) relates to federal/provincial jurisdictional conflicts, not interprovincial spats).

At the end of the day Kenney did what he always does, he filled the air with bafflegab, hoping his supporters would mistake talk for action.

If that’s not magical thinking I don’t know what is.

20 Responses to The Magical Thinkers: Horgan and Kenney