Another Fine Mess: Thanks Stevie

Posted on September 19, 2016 by susanonthesoapbox

And that’s what we had last week when protesters shut down the NEB hearings into the TransCanada’s Energy East pipeline—a mess.

Wildrose leader Brian Jean seized upon the incident as proof that Rachel Notley’s Climate Leadership Plan (CLP)—a cap on emissions, carbon tax and phase-out of coal fired power plants—was a tax grab that would never get “social licence” from “these people”.

Retired TransCanada executive Dennis McConaghy said Notley’s process was “naïve” and “ass backwards”.  She should have used the CLP as leverage, making its implementation conditional on getting pipelines approved.

Both arguments are poppycock.

When Notley rolled out the CLP she said its purpose was to make Alberta “one of the world’s most progressive and forward-looking energy producers.”  She did not say it was intended to gain “social licence” or promise that once it was introduced opposition to pipelines would melt away.

Notley was wise to avoid the term “social licence” because no one has the faintest idea what it means.

Ed Whittingham, executive director at Pembina Institute says the term emerged around 2011 and morphed into a “mythical beast” like the yeti or Bigfoot and is just as elusive.

Kai Nagata, energy and environment director at the Dogwood Initiative, doesn’t use the term at all.  He says it’s vague and nebulous.  He prefers to look at social licence in terms of the rule of law, noting that Canadian courts command more respect than its politicians.

Nevertheless it continues to be bandied about by politicians and oilsands CEOs who agree public perception and opinion has to be considered in order to get an energy project approved.

While community engagement is critical to the success of any project, getting “social licence” is not a prerequisite to project approval in any provincial or federal regulatory process.

If the Notley government, Pembina and the Dogwood Initiative have no use for the term one wonders why politicians like Brian Jean and Jason Kenney continue to give it street cred.

The conservatives’ attempt to discredit the NDP for failing to get “social licence” is simply political grandstanding.

However when business executives inflame the discussion by suggesting the ND government should issue an “ultimatum” to the rest of Canada something is seriously wrong.

Dennis McConaghy, a retired TransCanada executive, derides Notley for failing to make the implementation of the CLP conditional on getting pipelines approved.

This is a bizarre argument because:

The fatal flaw with the leverage argument is that Notley enacted the CLP to make Alberta a world leader in energy production.  She did not intend to use it as a bargaining chip in a business negotiation and she’s not about to blackmail the feds into approving pipelines by holding Albertans and the energy sector hostage.

All this is not to say that the angst around the pipeline review process isn’t real.

The Montreal protesters had no business creating a ruckus inside the hearing room and the NEB panelists had no business meeting with former Quebec premier Jean Charest when he was advising TCPL on its application.

But none of this is Notley’s fault. 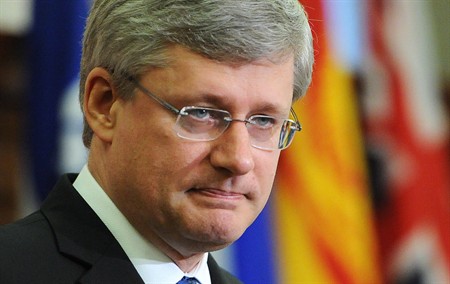 This fine mess is the direct result of Stephen Harper’s decision to “streamline” the process in order to guarantee the outcome.

Harper weakened the environmental review process which eroded the public’s trust in the NEB.   Calling environmentalists foreign-funded political radicals and telling Obama that approving Keystone XL was a “no brainer” didn’t help.

Harper politicized the NEB by stripping it of the power to approve or reject a pipeline application.  The NEB is limited to making recommendations to the Prime Minister and cabinet.  This may have been happy news to the industry when Harper was in power but it scares them silly now that Trudeau is sitting in the PM’s office.

(Perhaps Harper should have made the PM’s right to approve pipelines conditional on the Conservatives being in power forever).

Stephen Harper got us into this “fine” mess and Rachel Notley is trying to get us out of it.

Anyone who doesn’t understand that should stop wasting our time and check out a few Laurel and Hardy movies.

35 Responses to Another Fine Mess: Thanks Stevie