Posted on November 29, 2015 by susanonthesoapbox

Last Sunday hell froze over, or so it seemed to many Albertans.

Alberta’s NDP premier, Rachel Notley, unveiled her government’s Climate Leadership Plan. She was surrounded by representatives from NGOs and aboriginal groups as well as the CEOs of Suncor, Shell, Cenovus and Canadian Natural Resources Limited. No one batted an eyelash as Notley rolled out the government’s plan to:

Given Big Oil’s vitriolic reaction to Notley when she took power a mere six months ago one has to wonder what happened.

Notley has an uncanny ability to read the mood of the people, analyze a situation and determine just how far she can go before she hits a wall. With the Climate Leadership Plan she nailed it. 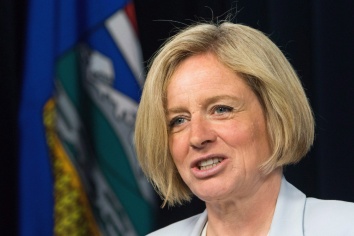 Environmentalists are happy because for the first time in recorded history Big Oil appears to accept the premise that the environment does not have to be sacrificed for the economy.

And while Notley’s plan is by no means perfect, it gives Notley an opportunity to demonstrate that an energy-based economy can implement effective climate regulations.

James Coleman, writing in the U of C law blog says Notley’s climate plan may be the most important climate announcement of the year because it may encourage other jurisdictions to follow suit.  No doubt that’s why she called it the Climate Leadership Plan.

Most importantly, environmentalists believe that Notley’s plan is the beginning of a process to transition Alberta away from fossil fuels to a more stable and diversified economy.

Big Oil is on board because it had no choice.

Oilsands producers are relieved they don’t have to bear the brunt of the $3 billion/year carbon tax (we’re all paying it).  The 100 megaton cap on oilsands emissions will allow them to continue to expand—43% by 2030. And shutting down the coal plants is someone else’s problem.

But most importantly their existing strategy to increase market access and improve their reputation was a dismal failure.

Big Oil assumed that getting the federal and provincial Conservative governments to streamline the regulatory approval process would speed up market access. It didn’t. They failed to account for public resistance.

Big Oil decided the cause of this resistance was stupidity. They called it a lack of “energy literacy”—the public simply didn’t understand that escalating environmental degradation was the price of prosperity.

The public disagreed. Then oil prices tanked, putting paid to the prosperity argument once and for all.

Eventually a light bulb went on. Last spring executives like Suncor CEO Steve Williams announced that “Climate change is happening. Doing nothing is not an option.”

So far, so good, but in a recent article celebrating Mr Williams as the CEO of the year, Mr Williams predicted that Suncor will be mining the oilsands for the next 200 to 300 years.

The public, particularly the younger generation, is becoming less enamored with fossil fuels in general and the oilsands in particular.

Jamil Jivani, the co-chair of the Future of Canada’s Oilsands, says younger workers are reluctant to work in the energy sector. They think it’s a dying industry. They’re not interested in squeezing more productivity or money out of old energy. Instead they’re looking for “completely new ways of making money, and new frontiers in the energy economy not yet embraced, or possibly even conceived.”*

Where will they go?

Well, they could follow Jatin Nathwani’s advice and shift from transporting fossil fuels to moving electrons generated by hydro, nuclear, geothermal, wind and solar power. Nathwani, a professor and Chair of Public Policy for Sustainable Energy at Waterloo says Canada has the technological and scientific wherewithal to do it.

Or younger workers can seek out “new energy” entrepreneurs like Elon Musk who invested the millions he made from the sale of PayPal in Tesla, an electric car company, and SpaceX, a space exploration company.

Musk believes that in a few years over half the new cars sold in the US will be electric cars. (Musk is pretty successful at anything he does. NASA is so impressed with SpaceX that it gave him a contract to transport astronauts and supplies to the international space station).

The demand for electric cars will get a boost from jurisdictions like California, which recently passed laws providing rebates to drivers who buy or lease zero-emission vehicles.

Electric cars won’t solve our climate change problems, but they are an indication that the public is moving in a greener direction.

Hidebound oil executives may believe that Big Oil will be toiling in the oilsands for another 200 years, but wise governments are preparing now for the economic disruption that will come with the advent of “new energy”.

Rachel Notley knows how to read the tea leaves. Her Climate Leadership Plan is the first step to ensure Alberta will be ready when “new energy” arrives on our doorstep.