The Face of Terrorism

Posted on April 28, 2013 by susanonthesoapbox

I’ve been to Washington DC many times, but this trip was different.  In addition to the

usual buzz created by lobbyists, bureaucrats, politicians and businessmen who had places to go and people to see, there was a sense of unease.  This feeling of foreboding was evident in the police cars parked on the street corners and the crowd control fencing encircling the White House.  It peaked with the false AP Newswire tweet that the President had been injured in an explosion at the White House which caused the stock market to nose dive.

The Boston marathon bombings were clearly taking their toll.

My American friends debated whether their country’s “experiment” with diversity had failed and whether it was time to return to the “melting pot”.  Are we all to be indoctrinated into the fundamentalist Baptist faith?

They debated whether waterboarding was really torture.  No limbs are cut off.   And whether it was okay to torture Dzhohkar Tsarnaevthe, the suspected Boston marathon bomber, who it should be remembered is an American citizen.

Lawmakers suggested they would have captured the Boston marathon bombers much sooner if they’d been allowed to deploy drone surveillance on the American people.

Thank god it’s not like that in Canada I thought.  We cherish our Charter rights and would never compromise our civil liberties in a knee jerk reaction brought about by fear…

…and then I came home and read the headline in Saturday’s Calgary Herald—CHANGING FACE OF TERROR.  Four faces stared off the front page;  the brothers accused of engineering the Boston marathon bombings and two men accused of plotting to derail a Via Rail passenger train.  The word “Terror” was written in bold typeface in case we didn’t get it.

This story provided air cover for a much more important story reported the day before—the Senate and the House had passed Bill S-7, the Combating Terrorism Act.  The full name of this legislation is An Act to amend the Criminal Code, the Canada Evidence Act and the Security of Information Act.

The fact that Bill S-7 is an amendment to existing legislation is critically important because it signals to Canadians (if they’d bother to check) that we already have significant anti-terrorism measures in place.

For example, Section 83.01(1) of the Criminal Code gives the police the power to charge suspected terrorists with offences under various conventions and protocols set by global authorities including the United Nations and The Hague.  These conventions include offences relating to aviation, maritime navigation, fixed platforms on the continental shelf, nuclear materials, hostage-taking, bombings and financing terrorism, both inside or outside of Canada.

Furthermore, the Criminal Code defines the offence of terrorism to include causing death or injury, endangering life, public health or public safety, inflicting property damage, disrupting essential services, conspiring, attempting or threatening to commit such an act or being an accessory after the fact or counseling another in the commission of such an act in order to pursue a political, religious, or ideological cause, or to intimidate the public with regard to its security, including its economic security.

That pretty well covers the waterfront, don`t you think?

So what’s the point of the new Combating Terrorism Act?

Here’s what the Legislative branch lawyers have to say.  Bill S-7 simply reinstates (and broadens) provisions in the Criminal Code to allow “for investigative hearings and recognizance with conditions/preventive arrest in relation to terrorist activity”. *

In plain English this means that we’ve entered the zone portrayed in the sci-fi thriller Minority Report.  Parliament has authorized the police to arrest someone before he’s done anything (that’s the “preventative arrest” part) and to force him to appear at a hearing and divulge any “information” he may have (that’s the “investigative hearings” part).  To be fair, before such an arrest can be made the police must get the consent of the Attorney General and, in some cases, a judge’s order.

Presumably the Attorney General will rely on the information presented to him by the police urging him to let them make a preventative arrest.  He’ll be well aware of the fact that if he doesn’t grant his consent and heaven forbid something goes wrong, the Attorney General`s picture will be plastered all over the front page of every Canadian newspaper together with the alleged terrorists under the banner headline:  AG Soft on Terrorists! 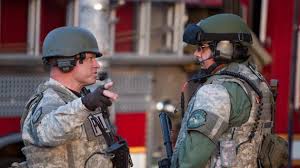 The real question here is: Why?  Why do police need these additional powers now?  What’s changed so radically that the already expansive powers available to law enforcement under the Criminal Code are no longer sufficient?  And given the impact Bill S-7 will have on our civil liberties why hasn’t there been a more fulsome debate on these issues in Parliament and in the media?

Surely we are not so frightened as a nation that we will gladly give up our civil liberties and enter a police state for our own protection—that is simply trading the tyranny of terrorism for something much more sinister.

*Library of Parliament Publication No. 41-1-S7-E

15 Responses to The Face of Terrorism