Through the Looking Glass

Posted on November 25, 2012 by susanonthesoapbox

On Apr 23, 2012, the day that Alison Redford’s PC government was re-elected, Albertans fell down a rabbit hole.   On Nov 24, 2012, they crashed through the Looking Glass and their rate of descent is rapidly approaching terminal velocity. What’s so special about Nov 24?  That’s the day that Don Braid, a columnist I respect even when we disagree, described the Wildrose Party “a slavering pit bull of an opposition” and slammed them for using Question Period as a free negative campaign.  He said their behavior transformed the Alberta Legislature, once the “…most muted, decorous Canadian legislature…[into one] as raucous as Quebec’s, B.C.’s or the federal Parliament”.

Are you kidding me???

When all else fails, they resort to name calling.  The recent episode where Deputy Premier Lukaszuk called Danielle Smith a “bottom-feeder” is typical.  He defended his comment by saying it “was not directed at the Leader of the Official Opposition but actually was a more general application and was aimed at all members of the Official Opposition.*

We’ve come to expect bowery boy behavior from Mr Lukaszuk.  What surprises me is that Don Braid would overlook it when he called the Wildrose slavering pit bulls.  But then again, we’ve fallen through the Looking Glass and things are not what they seem.

Having said that, something wonderful is happened on the Opposition side of the House; the Wildrose MLAs are working with the other opposition MLAs to raise the quality and intensity of debate.

The debate over Bill 2 (the Responsible Energy Development Assurance Act) which merges a number of energy statutes under one regulator is a good example** All of the opposition parties supported Bill 2 subject to a critical amendment that would require the regulator to consider the public interest test before he approved a project.

Mr Bilious (NDP) spoke in favour of the Wildrose amendment to restore the public interest test by saying it gives all Albertans a way to consider the impact of a project on the economy, the environment and social policy.***

Mr Anglin (Wildrose) argued that “..the public interest actually plays a very important role in the whole process of our legislative makeup, of our legislation, even dealing with individual property rights…It’s always that balance that we have to measure.”***

Mr Hehr (Liberal) spoke in favour of the amendment by arguing that our oil and gas reserves had to be developed in a socially responsible, economically friendly way that benefits the long-term interests of Alberta.***

All of the opposition MLAs asked the PCs a simple but critical question:  Why did the government eliminate the public interest test when it had been in previous incarnations of this legislation for decades?

Here’s the PC’s response.  Remember we’re on the other side of the Looking Glass so brace yourself for arguments that are incoherent and wrong under the law.****

Ms Delong:  It was removed because it is “extremely dangerous to private property rights.”

Mr Hughes, the Energy Minister in charge of this Act, was all over the place:  It was removed because it’s confusing and “we’re seeking greater clarity in this act, Bill 2 so we’re not including it in this act”.  It doesn’t matter if it’s removed because it will continue to exist in the other acts that this regulator will administer.  It might be put back in the form of a regulation. 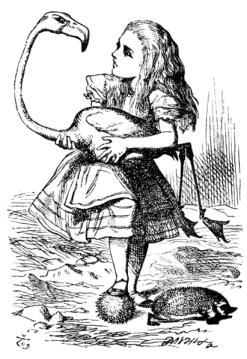 Got that?  No?  Perhaps it’s time to take a page out of Alice in Wonderland.  Alice burst into tears when she whacked her head on the ceiling after eating the EAT ME cakes that turned her into a giant.  Her tears became a sea that swept up all sorts of strange creatures.  She and the creatures managed to crawl out of the sea but could not get dry.  The Dodo suggested a Caucus-Race, which consists of everyone running in a circle with no clear winner.  This was pointless but Alice managed to frighten the silly creatures away by talking about her “moderately ferocious” cat.

Given the PCs over-reaction to the Wildrose, I suspect they see a moderately ferocious cat (not a slavering pit bull) on the opposition side of the aisle and like Alice, I’m really glad it’s on our side because here in Wonderland we’re going to need all the help we can get!

6 Responses to Through the Looking Glass