How Peter Lougheed Became a Political “Giant”: In his own words

Posted on September 16, 2012 by susanonthesoapbox

The internet was flooded with expressions of sympathy upon the passing of Peter Lougheed.   One of the most eloquent was a Twitter post by Justin Trudeau.  In 25 simple words he captured how we all felt:  “It is with tremendous sadness that we bid adieu to a giant of Canadian politics.  Peter Lougheed was a man of vision, integrity, and heart”.

How does a man (or a woman for that matter) become a “giant” in the political arena?

Steve Paikin, host of The Agenda, discovered the answer in a recent interview with Mr Lougheed.  The former premier had just been named the best premier in 40 years.* The list of top 5 premiers included:  Robert Bourassa (Lib) Quebec, Frank McKenna (Lib) New Brunswick, Allan Blakeney (NDP) Saskatchewan, Bill Davis (PC) Ont and, in the #1 spot, our very own Mr Lougheed.  Mr Paikin asked Mr Lougheed to name the quality that he and the other 4 premiers shared that placed them in the upper echelon of political leadership.

Mr Lougheed’s response may surprise you–not for what he said, but what he didn’t say.

What Mr Lougheed said was this:  he attributed his success to the ability to listen—to listen to the people in his office, the media, his party and the general public.  This indicates an open mind and a quest for information from all quarters, even the media.  Mr Lougheed said that after every interview he would ask himself what the reporter asked that surprised him.  Seeking input from unexpected sources helped Mr Lougheed understand the environment in which political decisions were being made.

What Mr Lougheed didn’t say but alluded to was this:  he understood that politicians, notwithstanding their political differences, could still respect each other on a personal level and that this respect would help them resolve their differences when they hit those inevitable bumps in the road.

Mr Lougheed’s willingness to see the person not just the politician served him well in his relationship with Bill Davis (the former Ontario premier who made it to second place on the best premiers list).  Mr Lougheed acknowledged that they had strong political differences but shared a love for football that led them to slip out of first ministers’ meetings like errant schoolboys to catch Monday Night Football.

Indeed, in discussing Mr Trudeau, the one politician you’d expect Mr Lougheed to view as an arch enemy, Mr Lougheed said “Mr Trudeau and I tangled very much” over the Canadian Constitution and federal/provincial financing arrangements, but “got along well” on a personal level.

Mr Lougheed became a giant in the world of politics because he listened to all who came within his orbit and was willing to set aside political posturing in the interests of public service.

No one described this quality better than Joe Clark who said: “Albertans and Canadians have a lot to learn from the way Peter Lougheed saw and served and enriched his country.  If more politicians developed this level of humility, the world would be a better place”. 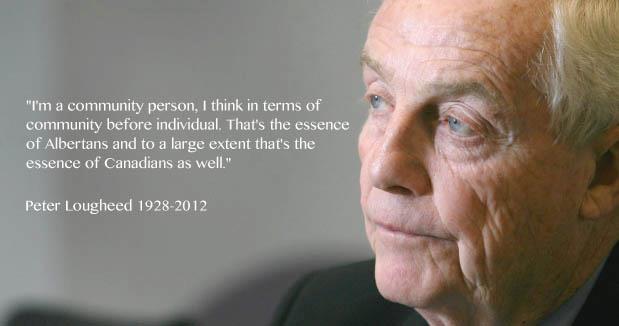 *The 30 member Policy Options panel of the Institute for Research in Public Policy put Mr Lougheed in the top five and 21 of the 30 placed him at #1.

This entry was posted in Politics and Government and tagged Great Politicians, Lougheed. Bookmark the permalink.

6 Responses to How Peter Lougheed Became a Political “Giant”: In his own words