Posted on December 4, 2016 by susanonthesoapbox

Do you have a headache?

Are you an Alberta conservative wondering how to react to Trudeau approving the Trans Mountain and Line 3 pipelines and, horrors, singling out Notley’s Climate Leadership Plan as being vital to getting to yes?

If so, your conservative leadership team has prepared a carefully considered, cogent response.

Brian Jean, the Leader of the Official Opposition, rose in the Legislature the day after Trudeau approved two pipelines Alberta desperately needs and demanded that Premier Notley denounce everyone—Trudeau for not approving Northern Gateway and for confirming the anti-tanker ban of the west coast, “special-interest groups” who intend to challenge the pipelines in court and “anti-Alberta activists” who are speaking against the pipelines.

That makes no sense.

Brian Jean, Leader of the Opposition

Asking Notley to denounce Trudeau for not approving Northern Gateway after he’s approved Trans Mountain and Line 3 is both churlish and politically naïve.

Deputy Premier Sarah Hoffman summed it up nicely when she told Mr Jean to stop being a “barrel half-empty” kind of guy and focus on the barrel being “two-thirds full”.

Denouncing “special-interest groups” and “anti-Alberta activists” (who knew you could be “anti” an entire province) demonstrates Mr Jean does not understand the rule of law (Canadians have the legal right to challenge tribunals’ decisions) and the principles of civil disobedience which state a citizen does not have to “resign his conscience” in the face of government legislation.

The PCs picked up where Mr Jean left off.

Energy Minister McCuaig-Boyd disagreed, pointing to a fundamental difference between the Enbridge and Kinder Morgan pipelines.  She said Enbridge had done everything it had been asked to do but the federal Conservative government failed to properly perform its due diligence which led to the Federal Court overturning the approval of Northern Gateway, whereas in the case of Trans Mountain both Kinder Morgan and the government had followed the process correctly.

Undeterred Mr Gotfried pointed to Mayor Robertson’s opposition to Trans Mountain and Elizabeth May’s vow to go to jail if necessary, saying this indicated the NDP’s “magical currency of social licence” failed to bring pipeline opponents on board.

Ms McCuaig-Boyd said while she “respectfully” disagreed with those who opposed the pipeline, she supported their right to do so “all the way to jail if that’s what it takes.”

Mr Gotfried snarked back:  “Always good to have the NDP world view”.

There is no reasonable response to Mr Gotfried’s comment other than to remind him and his fellow conservatives that this is the “world view” of most political parties in the Western hemisphere.

The conservatives continue to demand that Notley revoke the Climate Leadership Plan.

Let me rephrase that.

The conservatives want Notley to repeal the very thing that led Trudeau to approve the two pipelines in the first place.

Trudeau was crystal clear that without the Climate Leadership Plan his government would not have approved Trans Mountain or Line 3.  He said the plan had the support of industry and the environmental community.

While some members of the environmental community may be frustrated that the plan being used to justify these pipeline applications, industry support remains solid.

So the question becomes:  If the federal government and industry support the Climate Leadership Plan why are the conservatives opposed to it?

The answer became apparent this weekend.

The crowd began to chant “lock her up, lock her up” when Mr Alexander was speaking…

…and the man who hopes to be prime minister one day did not say, “hey guys, I understand your pain, but we’re Canadians, we don’t lock her up.  We vote her out”.  Instead he smiled and gestured and nodded along with the chanters. 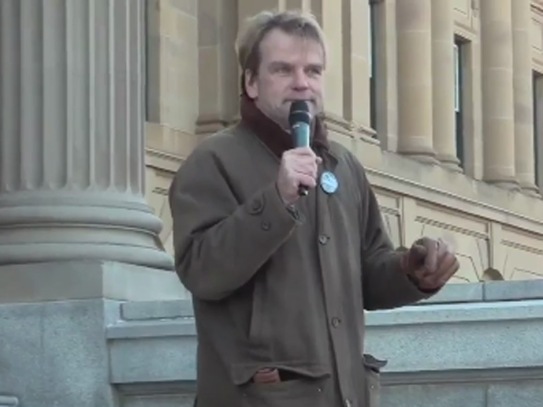 Mr Alexander wasn’t the only conservative leader to enjoy the moment.  None of the conservative leaders at the rally attempted to redirect the crowd’s fear and frustration away from Premier Notley let alone explain how they would force the Liberal government to approve pipeline applications in the absence of a coherent plant to address climate change.

Premier Notley is going to BC next week to explain her Climate Leadership Plan in greater detail.  She hopes BC-ers will be more receptive to the pipelines when they learn about the 30% carbon tax, the 100 megatonne/year cap on oilsands emissions, the 45% reduction in methane gas emissions by 2025 and the phase-out of coal-fired power plants by 2030.

She’s using quiet diplomacy to demonstrate that Alberta is doing its part to address climate change as Alberta transitions to decarbonized and renewable energy.

The conservatives on the other hand are inflaming the “lock her up” crowd in the hope it will carry them into power in 2019.